5 Art Exhibitions to finish the Summer

Traveling is always a good idea; traveling to see priceless works of art is an even better one.

Nearly 200 black-and-white and colour images from 46 photographers from the prestigious Magnum agency offer a panorama of the world of play. The friendly side of photographers who have captured some of the 20th century’s most iconic images.

2017 marked 70 years since Robert Capa uncorked a champagne bottle along with Henri Cartier-Bresson, George Rodger and David Seymour to toast to the success of the now-famous Magnum photographic agency. Since then, 92 photographers have contributed to its history, capturing the crucial events over this period in a language that is both artistic and journalistic, while also forging global icons.

The exhibition Players. Magnum photographers come to play, commissioned by Cristina de Middel and Martín Parr, shows a different facet of these professionals and seeks to present their fun-loving side through the concept of play. This proposal takes a look at the different meanings of the word “player” and collects images where play is present in different forms, whether in the actions captured by the images or in the recreational attitude of the photographer. In this proposal, either the photographers play or they watch Players also refers to the more general idea of people just having fun: children playing in the street in pictures by Bruce Davidson, Cristina García Rodero or Alex Webb among others; people playing cards, chess, or betting on horses by Marc Riboud and Bruce Gilden. Especially noteworthy are the already-famous Pokémon GO pictures taken by Thomas Dworzak (which became the most popular photos ever uploaded to the Magnum website).

A hundred works review the careers of Boudin and Monet and show the origins of the impressionist movement. This pioneering monographic exhibition addresses the relationship between both artists. 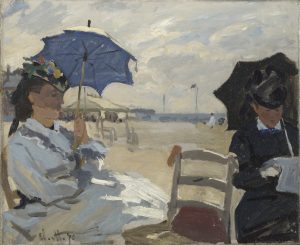 s of impressionism, grew up in Le Havre, where he met Boudin. He was aware of his talent, but he did not think that he should devote his work on making caricatures. For this reason, Boudin persuaded Monet to visit him in Normandy and they painted landscapes together.

Both artists painted outdoors and learnt a lot from each other. An example o f the similarity between the works of the French artists can be seen in The Meuse at Dordrecht (1882) by Boudin and in The Regatta at Saint-Adresse (1867) by Monet.

This exhibition explores Russian avant-garde art through the perspective of the Anti-art canons associated with the international Dada movement. The anti-academic work of Kazimir Malevich to eclipse classical art and the transrational language experiments (zaum) of Velimir Khlebnikov and Aleksei Kruchenykh are just some of the early contributions which substantiate the reasoning behind this show. 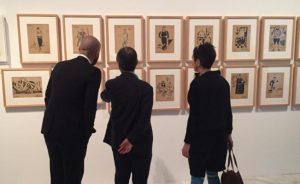 The selected works reveal the intentions of many artists to take part in projects of public unrest with connotations in close proximity to Marxism and to adopt rejection, irony, the absurd and chance as the basic principles underpinning their artistic manifestations. Extravagant performances, anti-war campaigns, a rejection of classical art and an innovative way of fusing the visual and the verbal are some of the common traits between the Russian avant-garde and the international Dada movement

Disney The Art of Storytelling. Until Nov 20

The versions of the classic Disney tales filled the TV screens of millions of homes and marked the childhood of various generations. In Disney, the art of storytelling, the steps taken to create such loved characters Mickey or Ariel can be appreciated.

Walt Disney was always interested in drawing, a passion which he maintained whilst serving for the United States in the First World War. After the war, the artist moved to Hollywood along with his brother, Roy, to found an animation studio. Since the premiere of Steamboat Willie in 1928, the first animated cartoon with synchronised image and sound, Disney has become one of the world’s most powerful empires and an icon of popular culture.

This exhibition is made up of a wide variety of drawings, watercolours, digital prints, storyboards and fragments of production notes that explain the process of adapting classic stories to cartoons.

Her work is inspired by the mass media, which is placed in line with popular narratives through painting. She also uses photographs published in the press to reinterpret them through drawing, painting, graphics and sculpture.