Madrid is well known for its art museums. While many permanent exhibits are world renown, the museums also treat us to excellent temporary exhibits.

Here are Madrid’s 5 best temporary exhibits to see till December 2012.

An interesting character, and Carlos III’s brother, Don Luis married a woman of lower social status and therefore was banished from the Court. He is obligated to live in a Palace in Avila   where some of the most interesting intellectuals of the era gathered. Goya could not resist visiting him and stays almost a month, making portraits of the family. Look for my favorite one, Maria Teresa de Borbón y Vallabriga, who was almost three years old… and later try to find her again in the rooms dedicated to Goya in the Prado Museum and discover what happened in her life.

In the 20th century, contemporary artists defined their opposition to the “ideal beauty” of the classical eras, to show the imperfect, the unstable, and the fragmented.  I think that these ideas are perfectly reflected in Bacon’s self-portrait. Look for it.

Celebrating the arrival of Guernica masterpiece 30 years ago,this exhibition provides an overview of the artistic events that were happening in the world during the 30s, and thus influenced Picasso’s creation. The brutal impact of the wars during this period, the passage from European fascism, the democratization of photography, consciousness of abstract art, the rupture in the vanguards, were the beginning of  the future of contemporary art. My favorite is definitely Guernica.

The Prado Museum seems to recently favor exhibitions focusing on the beginnings of the great geniuses careers. The unknown stage of the young Ribera, Rafael’s early years, the young Van Dyck … the latter, born the same year of Velazquez and pupil of Rubens (Velázquez who admires and even celebrates at the end of his life in The Spinners) tries to highlight his master and seek new and elegant forms of expression. I love his adolescent self-portrait. 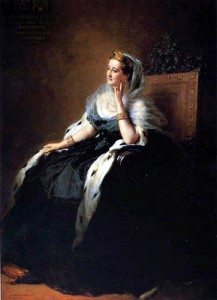 A good excuse to visit this wonderful museum is its fabulous coffee . Eugenia, after marrying Napoleon II, became Empress of France, intervening actively in public and political life, as well as becoming an important reference in the fashion world, making Paris the capital of luxury.

If you are an art lover then you won’t want to miss these spectacular pieces. Enjoy!