It is a particular pleasure for me to introduce the guest post of my colleague Marta Laurent the best tour guide in Barcelona. Barcelona has the dynamic and open personality so typical of Mediterranean cities. It is the perfect city to relax in, stroll around and enjoy. Barcelona has its own way of life which makes it unique…but remember, you need and expert as Marta.
In 1957 Picasso is living in a mansion near Cannes and he decides to shot himself in his workshop to work for months on a series of interpretations of the famous Las Meninas by Velázquez (which is one of the jewels of the Prado Museum in Madrid). 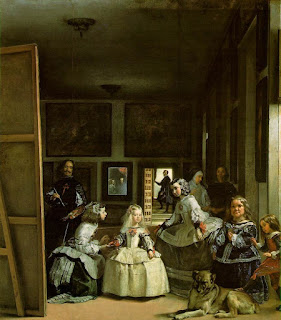 Years earlier, while talking to his good friend Jaume Sabartés, he had said that if somebody started copying Las Meninas, at some point he’d be tempted changing a tiny little bit. But that little change would affect the whole painting and therefore a whole new Meninas would be the result. That’s what we can see in this series that is composed of some 50 paintings. Here are 5 selected works that you need to check out to understand this series in depth:

1.       Las Meninas (Overview). This is the largest painting of the series, and also the only one in black and white (maybe a little tribute to the black and white postcard that he used to get inspiration during the creation of the series). Picasso has here changed the orientation of the painting, moving from the original verticality to an interesting horizontal composition. He also opens the windows, that appear closed in Velázquez’s original. The white light that comes in through them illuminates the scene.
2.       Infanta Margarita Maria. The daughter of the king Phillip IV is the central character of the painting, and it also attracts the attention of Picasso, who dedicates to her a variety of paintings. Note how often the maid offering her a plate with a little vase is only present in her portraits as a hand holding these objects. Maybe a way to make us thing about the respect with which such a young child had to be treated due to her royal status.
3.       The Piano. Believe it or not, it belongs to the Meninas series: Picasso thought that the posture of Nicolasito Pertusato, the dwarf kicking the dog, looked like a piano payer, and displaying his fine sense of humor he decided to add the piano. Note how the piano player is still dressed in red, as the dwarf in Las Meninas, and there is still a dog in the painting.
4.       Pigeons. Another surprising theme also belonging to the series. After weeks of being enclosed in his workshop painting Meninas over and over again, he opened the window of his workshop and painted the pigeon cages and the Cannes bay that he could see from there. Somehow, it feels like being a character of Picasso’s Meninas approaching the windows he has opened and showing us the landscape. A way to add nature and outdoors to the masterpiece…
5.       Portrait of Jaqueline. That’s the second “free interpretation” of Las Meninas, together with the Piano. The view of large paintings at the back of the room painted by Velazquez inspired Picasso to paint a painting of a painting: the portrait of his last wife Jacqueline Roque, presented as a painting itself, as he painted a yellow frame around it.

Marta is the founder of Foreverbarcelona Tours and has been giving private tours of Barcelona since 2000. She’s passionate about her city and one of the top guides there. She loves taking her guests to the Picasso museum and unveiling for them the less famous periods of the life and works of the artist.
Find more like this in: MC&C Blog