The Thyssen-Bornemisza Museum presents the first exhibition in Spain on the dissemination of Impressionism in the United States. Curated by Katherine Bourguignon, from the Terra Foundation for American Art and an expert in late 19th and early 20th century French and American art, the exhibition, which has already been seen at the Musée des Impressionnismes Giverny and the National Galleries of Scotland in Edinburgh, includes nearly 80 paintings that allow for an analysis of the way in which North American artists discovered Impressionism in the 1880s and 1890s and its subsequent development around 1900.

While artists such as Mary Cassatt and John Singer Sargent had spent some years living and exhibiting their work in France and enjoyed close relations with painters such as Degas and Monet, it was not until the exhibition of French Impressionism organised by the art dealer Paul Durand-Ruel in New York in 1886, that American artists began to deploy the new brushstroke, brilliant colours and fleeting effects characteristic of the French movement, and many of these artists decided go to Paris in order to become acquainted with it at first hand.

There are some amazing pictures to be seen. Here are a few of Teresa  favorites:

Mary occupies a central place in the history of the movement, as she was the only American to exhibit in four of the eight shows held by the group, an as promoter of  her French colleagues in the States. I specially love her sketchy brushtrokes and her luminous palette.

John Singer Sargent, Claude Monet Painting by the Edge of a Wood,1885 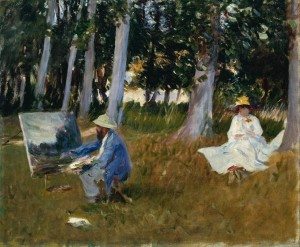 Sargent, who-like Cassatt-live in Paris during the years when the Impressionist developed, threw himself into the practice of painting “en plein  air” after having visited Monet in Givenchy in 1885. Although he never actually exhibited with the group, he has instrumental in spreading the new technique among other American artists. The canvas they Monet is painting has been identified by experts, and has been brought from Boston to Madrid.

Giverny became a pilgrimage for admirers of Monet. A colony of American artists established themselves at the small town, though only a few maintained a significant relationship with the master. One of them was Theodore Robinson, who witnessed the wedding procession of Suzanne Hoschedé, Monet’s step-daughter and Theodore Earl Butler, a painter from the States 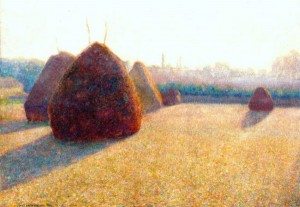 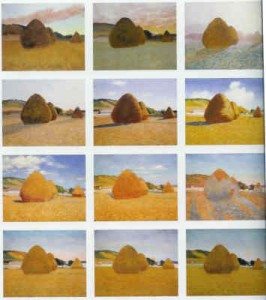 It is interesting to compare the influence of Monet in his younger colleagues.See, for example,the Haytacks ( 1891)painted by John Leslie Breck, who struck up a friendship with Monet´s daughters and who created the series on the left shortly after as a way of studying the Shifting effects of light

Whistler’s monochromatic and mysterious lanscapes were to exert an influence first on the members of the Impressionist group, whose ranks he never joined, and later on his own compatriots like Twachtman, who represented the rural milieu of Connecticut with a poetic and mystical air 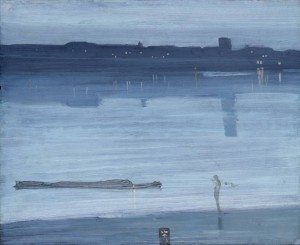