Antonello and the Blue Background

I would like to start by attributing some of my most profound inspirations and knowledge of paintings to my great Professor Isabel Alonso. She is responsible for having provoked curiosity in me; further deepening my passion for the art collections found in The Prado Museum.

One of her favorite masterpieces is “Dead Christ Held by an Angel”, by Antonello da Messina, that today, thanks to the preparation of a new temporary exhibition, has been moved closer to Tiziano and shines with the deep blue background that it is placed before.

Alexander Dumas (Villers-Cotterts, 1802-1870, Puys) tells a story of Michael Angelo, Tiziano and Raphael, in his novel that was published in 1846. He explains that Antonello da Messina, upon arriving to Venice in 1475, bragged about having discovering a miraculous way of using “oil paint”. However, Giovanni Bellini astutely stole the discovery from him while disguised as a rich noble who asked Antonello to do a portrait of him. The noted biographer added that Antonello’s claim was untrue because he had learned it in Flanders from Juan de Bruges.

The early use of oil painting seems to have been learned in Naples, and nowadays we know that Antonello was never in Flanders. The same error occurs in Vasari.

Antonello was born in Messina in 1430, and learned to paint in Colantionio´s workshop in Napels. Early on, he learned the Flemish style; firstly because many Flemish painters resided in the Naples´ Court, and secondly because Colantionio´s workshop the commissioning of copies of Flemish paintings was abundant. Due to this, he further learned to marvelously paint detailed portraits, sceneries, and use bright colors. Later, Antonello travelled north to Rome, where he met Piero de la Francesca and Fray Angélico, and they subsequently added to his development and use of the humanistic and pre-renaissance aspects of perspective, spatial representation and volume of the figures, shades, lights and the luminosity of colors.

Later he visited Venice and met the Bellini brothers. During this visit Antonello da Messina introduced oil painting, and with this the Venetian school, experienced a true revolution. At that time Antonello learned from Giovanni Bellini (Tiziano and Giorgione’s teacher) of the serene beauty and harmony of the renaissance – painting with greater lyricism.

This commentary does not add anything to any of the text quotations, but I would like this to be the starting point, because I would like to dream that Antonello did not arrive in Venice bragging about a secret way of painting, invented by him. I would like to dream that he arrived in Venice and shared his way of panting with the Bellini brothers and their brother in-law Mategna and that they shared their knowledge while respecting each other’s greatness. From this theory, I would like to add to Antonello’s generosity and comment on the “Dead Christ Held by an Angel” and “La Annunziatta” (“The Annunciation”) -Palermo Museum- painted around 1470.

We know of many previous exquisite, serene, beautiful and sublime Annunciations, but the one by the Sicilian painter is unparalleled. He portrays the Virgin Mary in the foreground, in the moment the annunciation 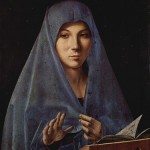 occurs. Mary expresses the perturbation and surprise of the moment, and advances her right hand forward and out of the painting. It is this hand that provokes a dialogue with the spectator; who finds himself between Virgin Mary and Saint Gabriel the Archangel – who has to be behind him. This is a generous way of making the spectator participate in the scene, and clearly results in fascinating and mesmerizing contemplation.

The depiction of Christ dead, held up by the angel, was painted by Antonello upon his return to Messina in 1476, after having travelled to Venice. The painting, with exquisite composition, demonstrates the essential aspects of Italian painting – the luminosity and transparency of colors, the perspective, and the carnation and volume of the figures. As well we can see particularly Flemish elements, when we look at the certain rigidity of the clothing or the extreme detail of the horses and the scenery.

We know of many depictions of the death of Christ, of the descent, the burial, the piety, even, the death where Christ is held up by angels. Some images are impacting, others are startling – but almost all are dramatic. From my point of view, this image, like the previously mentioned, is absolutely genius. 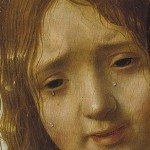 In this painting, dead Christ appears monumental and with great realism. The angel, very delicate and small, makes an extraordinary effort to incorporate and hold Christ’s lifeless body. All the drama is expressed by the angel, who with infinite sweetness holds Christ incorporated and embraced.  But there is more – and this is magnificent – the angel cries desolately and looks over making the spectator participate in the drama.

When an observer looks at the painting, he/she first sees the body of Christ in the foreground, occupying most of the space. A gaunt Christ is depicted, wounded from the torture, and with an expression of abandonment and absence that come with death. And secondly, one finds the look of the angel, who is crying inconsolably, and in a way that dramatically communicates his infinite pity. Only few paintings can establish a dialogue so hypnotic and overwhelming with the spectator – supporting my theory of the grandeur and generosity of Antonello de Messina.

It is widely accepted that this painting is one of Antonello da Messina’s master pieces and we are very fortunate to have it in the El Prado Museum.