The exhibition traces the evolution of Chagall life 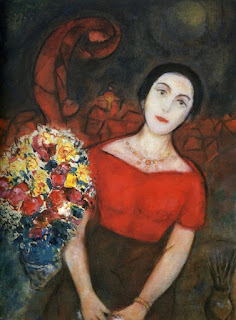 Marc Chagall developed a highly expressive and colourist pictorial style that was closely linked to his own life and to the religious and popular traditions of the Russian Jewish community. Chagall combined elements from Cubism, Fauvism and Robert Delaunay’s Orphism to create a personal style that is difficult to categorise. Born in the small Russian town of Vitebsk, Chagall’s long life (he lived to be almost 100) was marked by the major historic events of the first half of the 20th century. A tireless creator and one always open to new experiences and to learning, Chagall’s output is rich and varied. Using his particular and unique style, he was permanently open to exploring new techniques (oil, printmaking, sculpture, ceramics, stained glass, etc) and to undertaking new projects. One important section of this exhibition, for example, is devoted to his significant activitie s as a book illustrator. Throughout his life Chagall was surrounded by poets and writers who were his friends and with whom he maintained close and mutually creative relations. Breton, Malraux, Cendrars and Apollinaire were among those who considered him a “literary painter” and it is evident that Chagall loved literature, particularly the message of freedom contained within words, which he was able to enrich with his fantastical and colourful compositions.

Chagall was essentially a master of colour; his tones vibrate in different intensities and function to highlight the subjects of his paintings. His blues, greens, reds and yellows fill with life his real or imaginary characters, who inhabit a special universe of their own. Everything is possible in this constantly surprising world based on real or imagined stories: a violinist, a rabbi, two lovers, an acrobat, a landscape and a wide range of fantastical animals fill his compositions. In this world, colours and surprising figures and animals come together in previously unknown ways, resulting in a unique combination that made Chagall a forerunner of Surrealism, as that movement’s theoretician, André Breton, noted: “With Chagall, metaphor made its triumphant entry into modern painting.”

The Bible has been a source of inspiration for Marc Chagall ever since he was a boy living in the ghetto of Vitebsk in White Russia.

‘Ever since my earliest youth I have been fascinated by the Bible. I have always believed that it is the greatest source of poetry of all time…The Bible is an echo of nature, and this I Have endeavoured to transmit….In art everything is possible, so long as it is based on love.’

Chagall Masterpieces transport us into a magical world teeming with fabulous creatures and characters. His poetic reach takes in both Biblical themes and the world of acrobats and artistes, one of his most moving motifs being lovers entwined in each others’ arms and wreathed in a myriad of flowers. Drawing on his Jewish-Russian roots as an inexhaustible source of inspiration, Marc Chagall continued reimagining this essentially spiritual narrative right to the end of his days and in doing so conveyed a message of hope and freedom that even now, at the dawn of the third millennium, has lost none of its relevance or urgency.

The exhibition will be on display until May the 5th 2012