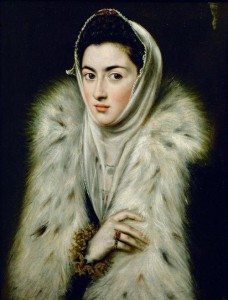 It could be that those which evoke feeling have something; soul…a soul that is similar to yours and for this reason, it excites you, inspires you, makes you feel.

Not all pieces from the same artist reach me, but it´s true that there are many from this artist, born in Cremona, that inspire me.

Who is this woman of such clear complexion who looks at us sideways, dressed in lynx fur and shiny ruby rings? Why, for years, was the authorship of this work accredited to Greco, Sanchez Coello and not to Sofonisba? Why is she named the Dame of Armiño if it´s the lynx that wears the neck?

It can´t be anyone but the second daughter of Philip II and Isabel of Valois. Catalina Micaela of Austria, Duchess of Saboya. Born in 1567, lived only 30 years. She was her father´s favorite and during their existence, for state matters, he maintained endearing letters of his two daughters. These letters depict a loving image of an austere, religious and rigid king of which his black legend divulges.  She married the handsome Duque of Saboya in 1585. Catalina soon adopted a new court, distancing from the rigid etiquette that was imposed by the Spanish Monarchy. Her husband lavished her with dances, private concerts and carnival entertainments.

In ten years Catalina had two children. Her maternal fertility brought great joy to the Saboya court; however it was also the reason for the early death at 30 years of age.

Sofonisba Anguissola (Cremona, 1532 – Naples, 1625) is another passionate woman. When the court of Felipe II arrived in 1559, she was already a Dame under Queen Valois and had ordered the memorable portraits of humanists or collogues – and she would continue to do this through the rest of her life, never losing her Italian style. Born into an interesting family, and one of the most creative and intellectual city of Europe, definitely contributed to this great artist. 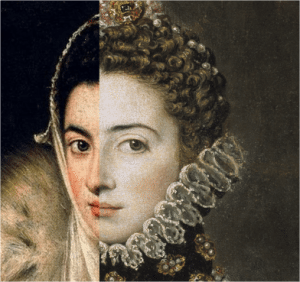 Observe this painting. The similitude between Anguissola and this painting do not reside only in the model: other portraits of Sofonisba (the portrait of the girl and the little person, for example). They seem to be overdone in the composition and fulfilment.

Following in the footprints of the paintings of this artist is extremely difficult. We can only imagine some travelling along in the cargo that Jose Bonaparte took from Spain, carrying treasures that were sacked from the Royal Palace. These treasures were then robbed along the journey and arrived, by coincidence, to the Duke of Wellington, whose intention was to return them to Spain. However, the Spanish Minister in English refused his offer and allowed him to keep the treasures as a prize. We can certainly confirm some things: a couple of paintings by Sofonisba were given to the Ermitage along with other Spanish paintings, where they still can be found. They arrived there thanks to the banker Coesvelt, who was from Amsterdam and who lived in Spain during the war of Independence. He knew how to take advantage of the rough waters in order to gain the collection and later sell it to Alexander I of Russia.  At least two more of Sofonisba´s master pieces would run through risky adventures. They form part of the Spanish Gallery of Luis Felipe, in the Lourve of Paris. Their arrival can be attributed to other painters. Firstly, the portrait of the young Dame was considered to be a work from Moro, Bronzino and Sanchez Coello. Now we can see it displayed in the Lazaro Galdiano Museum with a sign saying that it is a Sofonisba. Secondly, the Dame of the armiño, garnered enormous admiration and it´s interesting to point out that the false attributions in the Spanish Gallery of Luis Felipe were well know during his epoch, although they are not accredited to Sofonisba.

One extra detail in admiration of this painting is that Cezzane freely made a copy of it and he called the Greco the creator of modern art. 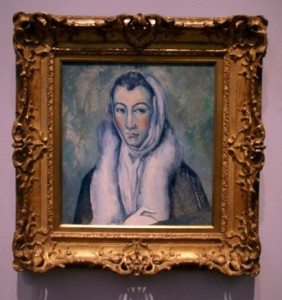 It´s worth remembering in order to ask ourselves:  what was the footprint of Sofonisba Anguissola on other artists? Did it ruin the image of the 18th and 19th centuries to have a successful, aristocratic, astute woman, who gave advice and breached social formalities? She married at 50, a man who was double her age, Orazio Lomellini, and a captain of a Genoese boat; he took her from Sicily after her first widowhood. Or maybe they didn´t want that she form part of the history as her friendship with Felipe II caused jealousy and rancor?

Or does this melancholy that wanders through the sketches reflect a painful past?

Enjoy these works. You can admire them in the exhibition of the Palacio of Santa Cruz which is dedicated to Greco. It is full of passion and feeling. Take a look at the sign which accredits the piece to a particular artist and tell me why her name doesn´t appear…Contact us for un exclusive Luxury Art Experience