Born in France in 1593 George de la Tour early artistic career is somewhat of a mystery but it is documented that at the age of 27 he petitioned to the Duke of Lorraine to move to wife’s nearby hometown of Luneville and work there as a professional artist.He was granted permission and set up as a master painter with a studio and apprentice.

La Tour became a successful provincial artist, painting mainly religious scenes.He became recognised for his nocturne paintings, where night scene narratives were dramatically lit as if by the light of a candle.

The Duke of Lorraine became a patron of his work and the local bourgeoisie (wealthy Middle Classes) provided plenty of work for La Tour.Enjoying increasing popularity, in 1639 he was appointed as painter to King Louis XIII.Disaster did however strike in 1638 when La Tour’s house and studio were destroyed by fire.The whole town of Luneville was sacked and burnt.A great number of his pictures were lost. 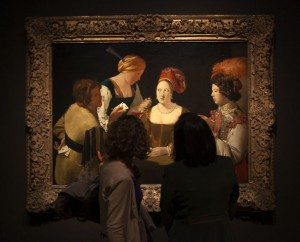 After his death in 1652, La Tour’s work became unfashionable and his name slowly forgotten. It was only in the early 20th Century that his works were again unearthed and his artistic talent and historical importance again recognised. He is now regarded as one of the most important artists of his time working outside of Rome.

The Prado Museum presents the most famous works of La Tour, one of the most important painters in France during the seventeenth century. From the 23rd of February to the 12th of June

30 out of 40 of the painter’s well-known paintings will be on display. Georges de La Tour paints scenes with religious subject matter and themes. His sensitivity and realistic treatment of subjects stand out.  For a long time, some of his paintings were attributed to Spanish artists such as Velázquez, Zurbarán, Juan Rizzi, Murillo and Maíno
Come to Madrid and enjoy this wonderful rediscovered …Be as amazed as Louis XIII was, by simply walking into this exciting new experience.