One of our last genius; Ferran Adrià

Spain is a country with  powerful creative minds,  that is why through the centuries great artists were born.  It is no longer a secret that my favorite genius is Velázquez. But who are my favorite artists of the century? Painter and sculptor Miquel Barceló and chef Ferran Adrià. 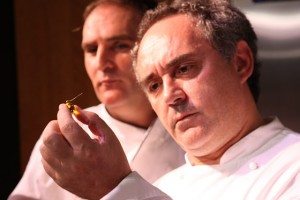 We are fortunate to have in Madrid until March 1 a very interesting exibit  about  the creative process of this genius.

Ferran Adrià invented 1,846 dishes and then stopped. He felt he had created enough and that soon he would reach his peak. He had to go further, and therefore decided to close elBulli. This was back in 2011, the beginning of the second part of his life. From thereon in, he would dedicate himself to, as he says, sharing “everything we have learnt over these years regarding the creative process and its methods”. Both in the kitchen and out.

From his restaurant his inventions could be shared with 6,000 people a year. From his foundation he can reach millions. This new format allows him to spread the word concerning his research and share his knowledge in order to inspire “future generations to be more creative”.

Ferran is a fervent believer in generosity. He says that this is what has moved him to pass on everything he learnt over 25 years at elBulli. During this period, years were split into two halves. Six months were dedicated to research, six months to the restaurant. Its final closure in 2011 represented his absolute commitment to investigation. “We have turned elBulli into a laboratory for the creative process”, he says. Over the past three years this has meant his dedicating his time to putting all the knowledge he has accumulated into some sort of order so that he can pass it on to the rest of the world. The aim is to reveal what led him to revolutionise gastronomy and whether this model can be applied to other industries. The idea was that what had worked for them might work for others. He has long held that this has been a “revolution”, albeit a “pacifist” one, a nuance he always adds with a knowing smile.

This revolution began back in 1987. Ferran attended a conference given by Jaques Maximin. In mid-presentation, the famous French chef suddenly said: “Creating is not copying.” This sentence hit Adrià like a bolt of lightning. As he says, still with a certain sense of awe: “A sentence that can change your life”. No need for muses or supernatural powers. Adrià believes in studying what others have done before, in research, and in stretching that work beyond its limits.

Ferran believes that the most profound driving force behind creativity is ambition. This is what made a 17-year-old teenager who washed dishes in a Castelldefels hotel strive to become the greatest chef in the world for five straight years. Here we should add the many awards he has received as well as the Honoris Causa granted him by the Universities of Barcelona (2007) and Aberdeen (2008) and Valencia Polytechnic (2010). The year 2010 also saw Harvard University ask Ferran Adrià to abandon his administrative studies in order to give classes as a guest professor at its School of Engineering and Applied Sciences.

This ambition is all about learning, inventing, discovering and seeing life as did the 18th century explorers. “Our most important task is to find challenges for ourselves” he says. “We get up every morning with a challenge. That’s what makes us happy. And happiness is the most important thing in life.”

This ambition can also be called passion, emotion or even obsession. This is a word the ever-curious Adrià uses to describe himself. “The ability to spur action is my obsession” he says. “I’m like a whirlwind”.

He is striving to decode gastronomy as someone who does not believe in muses. He does, however, believe in investigation. He discovered its value through research. Close El Bulli  was a decision that would change his life. Creativity at elBulli was multiplied by a thousand. And when he decided to close the restaurant for six months a year in order to research, creativity was multiplied a billion.

In 2004 Adrià understood that research required time. “In order to make a dish of asparagus, we would dedicate a whole week to studying asparagus”, he says.

Ferran passes all his ideas through a filter, a simple question: “Why?” This is the guiding principle of research, one he has dedicated almost all his life to.

It’s lunchtime and all Adrià is eating is fruit. He doesn’t have the time for any more.

He also seeks to surround himself with professionals he admires and who are far removed from his normal day-to-day working life, people he describes as “ten times more efficient than people from other disciplines”. These individuals are the executive vice-president of MIT, Israel Ruiz; the former director of London’s Tate Modern, Vicente Todolí; the Nobel prize-winning economist Joseph Stiglitz; the director of the Telefónica i+D Internet and Multimedia centre, Pablo Rodríguez; and the chef Juan Mari Arzak. These men form the group that Adrià calls his ‘angels’.

Ferran says that he feels he is facing one of the greatest challenges of his life. Teaching others to invent is now as important to him as inventing itself was to him in the past. Teaching anybody. Not only a chef or someone with grand, world-changing aspirations. Absolutely anybody working in any field.

What he has in his hands right now “is a three-dimensional bomb”, he says