Thyssen Bornemisza in Madrid will be showing the exhibition, Pop Art Myths, exploring  one of the most liberating movements in the history of art, as it brought an end to the division between “high” and “low” culture, opening up a debate over the possibility that even everyday objects could become art.

There’s always more to Pop that meets the eye, as Andy Warhol’s Campbell soup cans reveal. In the summer of 1962, the celebrity artist showed his 32 Soup Cans in his first solo exhibition at the Ferus Gallery in Los Angeles, in what was described as “a brilliant slap in the face to America”, transforming the artistic panorama forever. The idea is usually credited to an art dealer and decorator, Muriel Latow, who a year before had suggested to Andy that he should paint money, or “something people see every day, like a Campbell´s soup can”. Accordingly,the next day, Warhol bought each one of the 32 varieties, and inmediately started making a series of drawings. 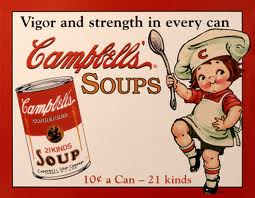 Campbell’s Soup was also linked with Andy’s memories. The Warhol family, originally migrated from Ruthenia, in the Carpathians, used to have a sándwich and some Campbell’s soup for lunch, and it was young Andy´s privilege, as his mum’s favourite, to choose the flavour of the day.
At first, the show was object of derision, and a nearby gallery filled its windows with cans and offered “the real thing for only 33 cents a can”. But the artist, a genius in self-promotion, turned that into his own advantage, as he took a photographer to the supermarket and got his picture taken signing cans, in an image that was picked up by the Associated Press and that made the news.

The gallerist’s determination to keep the whole series together, proved to be one of the most lucrative moves in the history of modern art. He bought several canvases back from collectors who had paid 100 dollars for each and eventually sold the original set to MoMa for 15 million!
They have been refered to as “portraits”, and in a way they are, as the artist considers the can as he would a human face, condensing in it what Pop Art was all about: a reflection on the effects of unprecedented consumerism in modern society, of mass production, proliferation of objects and waste.