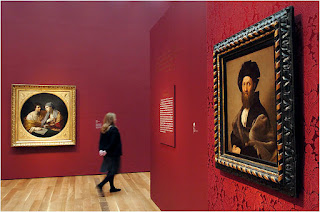 The Prado museum in Madrid, Spain, dedicates an exhibition to Raphael Sanzio and his workshop. This exhibition is very particular, because is devoted to the last years of the master’s life, when he lived and worked in Rome, as one of the most influential artists of his time.
One cannot speak of Raphael Sanzio in a few words. This is only a simple invitation to know him following different paths characterized by spaces and emotions.

The exhibit includes more than seventy signed works, paintings and drawings, all of them created in his last seven years of life; from the start of the pontificate of Leo X (1513) up to the artist’s death in 1520.

Space in the exhibition will also be given to the work of Raphael’s principal pupils and followers, such as Giulio Romano (c. 1449-1546) and Giovanni Francesco Penni (1488-1528), who worked under the master’s close supervision on the late commissions he received.
You will admire some masterworks like The St. Cecilia’s altar piece (Bologna, Pinacoteca Nazionale), and I highly encourage you to take a look to  another holy woman, the Santa Catalina from the  Spanish painter Fernando Yañez de la Almedina , painted a few years before that of Raphael and extremely beautiful and evocative (probably my favorite canvas  at the Prado)
Raphael´s works is not only the result of his Renaissance ideals or the multiple artistic influences he received during his stay in Florence and in Rome. The light in his paintings is Italy´s  light and he always carried inside him that light, that air that left a lasting mark in his soul.

One can be a great painter only when he has a great soul and is able to express his soul through his artwork. Raphael´s drawings reveal his sweetness, strong sensations, and complex emotions.

And all of this is present in the the portrait of Baldassarre Castiglione ;where Raphael gives us a sensitive, lifelike image of his friend ,an image which, in a letter to his wife, Castiglione described as rather hauntingly lifelike. The gloomy tones and the immediacy of the picture show us a man who is listening attentively and thoughtfully to our conversation and seems about to respond, rather than someone so far away and above us that we can have no hope of gaining his ear. This image had a tremendous impact on later portrait painters from Rubens toVelázquez (in the portrait of Conde-Duque of Olivares)  and beyond, and for very good reasons. It masterfully celebrates intelligence, good taste, and good manners so that, even if we did not know the identity of the sitter (Italian courtier, diplomat, and writer, best known for his (The Courtier) , these qualities would be readily apparent to any sensitive observer.
On 11th of March 1525 Baldassarre Castiglione arrived in Madrid; and was received solemnly at the Imperial court, where he congratulated Charles V for his victory at Pavia.
It’s been 487 years and in Madrid we are excited to receive this gentlemanagain.

After his death in Toledo 1529 a monument was erected in the sanctuary of Santa Maria delle Grazie, outside of his birthplace at Mantua. It was designed by the pupil of Raphael, well represented in this exhibition too: Giulio Romano, and was inscribed with the following words:

“Baldasssare Castiglione of Mantua, endowed by nature with every gift and the knowledge of many disciplines, learned in Greek and Latin literature, and a poet in the Italian (Tuscan) language, was given a castle in Pesaro on account of his military prowess, after he had conducted embassies to both great Britain and Rome. While he was working at the Spanish court on behalf of Clement VII, he drew up the Book of the Courtier for the education of the nobility; and in short, after Emperor Charles V had elected him Bishop of Avila, he died at Toledo, much honored by all the people. He lived fifty years, two months, and a day. His mother, Luigia Gonzaga, who to her own sorrow outlived her son, placed this memorial too him in 1529”

I hope to have able able to give you some simple ideas to come and enjoy the exhibition
Find more like this in: MC&C Blog