The fascination for Mirrors and Reality over the centuries

Pliny the Elder told the story of two rival painters, Zeuxis and Parrhasius, who were competing to see who could produce the most realistic painting. The story goes that Zeuxis had painted a picture of grapes so realistically, that birds were deceived enough to peck at the fruit. After Parrhasius finished his painting, he invited Zeuxis to his studio. Zeuxis tried to lift the curtain from the panel to see the painting underneath. To his surprise, the panel was a painting of a curtain. Zeuxis conceded that Parrhasius was a better painter, whereas he had deceived only birds, Parrhasius had fooled a human being.

Human beings feel the enchantment of the mirror in the early months of life. Confronted with its image, the infant becomes aware of its own existence and begins to construct its identity as a  subject, in a process that Jacques Lacan designated the “mirror stage.” From that point on, like a Narcissus redevises, the child cannot resist contemplating its own reflection. Glass or metallic  surfaces and, of course, water will attract the child’s attention in a  process that both reveals our desire to observe ourselves at the same time that it confirms our fundamental alterity, our other-ness. The mirror reflects everything we see in reverse, and yet it awakens a dark sense that it is also somehow hiding something. Like Alice, who immerses herself in the world beyond the mirror’s surface, the painters brought together in the sixth display of series, carry us over into the mysterious world revealed by reflections. 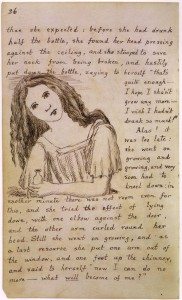 “There’s the room you can see through the glass – that’s just the  same as our drawing-room, only the things go the other way,” Alice explains to her pet kitten at the beginning of  Through the Looking-Glass, and What Alice Found There. “The books are something like our books, only the words go the wrong way; I know that, because I’ve held up one of our books to the glass, and then they hold up one in the other room.”

Going beyond the iconographic commonplace according to which mirrors are deployed as images of vanity or lust, or as symbols of absolute values like truth, wisdom, or purity, on this occasion we aim to focus principally on these artists’ use of such motifs as a way of self-reflexively examining pictorial representation and the painting ’s limits.

We want to try to really take you to another level !Contact us for un exclusive Luxury Art Experience