The Fauves. Passion For Color, journeys through the génesis and decelopment of Fauvism, controversial and exuberant movement thet entailed a renewing challenge towards the art of its time. 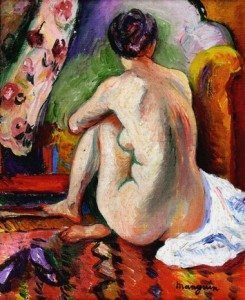 The exibition offers an overview of the first major avant-garde artistic movement of the 20th century.

The fauves, led by Henri Matisse, André Derain and Maurice de Vlaminck, really shook up the art establishment of their day with their innovative approach to the use of color, their energetic brushwork and seemingly wild execution. In 1905, their works were exhibited in the Salon d’Automne, causing such a stir among the public and the critics that they named them the “wild beasts” –fauves in French.

Their development was as brilliant as it was intense: the movement barely lasted two years, but their impact was extraordinary, laying the groundwork for other avant-garde movements such as Expressionism and Cubism.

The exhibition, comprising over 150 pieces, is divided into five chronologically-ordered sections, which lay out the truly intense stylistic development these artists underwent in just two years. In addition, there are two small sections devoted to drawings and ceramics, disciplines that will help to appreciate the versatility and creativity that characterized these audacious, young painters.

The first of these is devoted to the early pictorial experiments carried out by the artists who were to later form the fauve group while they were still learning. Here we can appreciate the influence that the painting of Van Gogh, Gauguin and Cézanne exercised on these artists. 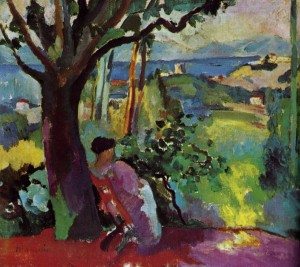 Self-Portraits of the Fauves clearly manifests the close friendship that bonded the members of this group and was key to the creation and development of the movement. Most noteworthy is the pair of portraits produced by Matisse and Derain during the summer they spent together in Collioure.

In the third section of the exhibit, Acrobats of Light, we can witness the impact of the Mediterranean light on how the fauves used color. They increased the intensity of the tones on their pallets following their stays on the Côte d’Azur, creating paintings that caused a sensation at the 1905 Salon d’Automne.

The Wildness of Color includes the works that the fauves produced after their success at the Salon d’Automne, which consolidated their identity as a group and encouraged them to continue their pictorial investigations.

Worthy of note are Derain’s depictions of London, as well as the incorporation of Le Havre artists such as Raoul Dufy, Georges Braque and Othon Friesz, who brilliantly revitalized the movement.

The final section, Fork in the Road, presents the different paths the fauves took from 1907 onward. The influence of Cézanne can be seen in a series of paintings of bathers and the geometrizing of landscapes that were a prelude to Cubism, while the emaciated women of Van Dongen, Rouault and Vlaminck heralded expressionism.

The exhibition, produced by Fundación MAPFRE, has proved possible thanks to the support and collaboration of the 80-plus lenders. Among these are such major institutions as the Tate, the Pompidou Center, the Musée d’Art Moderne de la Ville de Paris, the Kunstsammlung Nordrhein-Westfalen of Düsseldorf, the Milwaukee Art Museum or the National Gallery of Denmark, which have lent some of their most emblematic works.
The generosity of more than 30 private collectors must also be underscored. They agreed to lend works which are unknown to the general public yet of extraordinary quality, thus making this exhibition a unique opportunity to appreciate them